2018 was memorable for speaking at my first ever conferences, and visiting the USA for the first time. And in 2019 I was able to do both again. I spoke on Azure Durable Functions at Ignite the Tour London in February, and on Technical Debt at Techorama Netherlands in October. I also went to my second Microsoft MVP Summit in March, and ended up making a second visit to Microsoft in Seattle a couple of months later for some business meetings related to my day job at NICE.

Another highlight was to attend the first ever Pluralsight Author Summit in Europe in May. Despite having been an author for them for many years, I had never been to a Pluralsight event, so it was amazing to meet lots of the staff and other authors for the first time.

A lot of my effort this year went into the release of four Pluralsight courses. I started by completely re-recording my Azure Functions Fundamentals. This has been my most popular Pluralsight course by a long way, so I wanted to make sure it was as up to date as possible. I completed that in April, and then in July I released an update to my Microsoft Azure Developer: Deploying and Managing Containers course, which included a new module on container security. This course is part of a partnership with Microsoft Learn which means you can watch it for free even if you're not a Pluralsight subscriber.

Then later in the year, I worked on two courses for a new Microservices Architecture learning path at Pluralsight. First was Microservices Fundamentals released at the end of October, followed by Building Microservices completed in December. They kept me extremely busy over the past four months, so apologies for the reduced blogging output during that period.

Azure remains a huge focus for me at the moment. My day job as a cloud architect at NICE has given me a constant stream of interesting challenges and new technologies and practices to learn. There are a lot of exciting developments in the world of cloud native computing at the moment, but it can sometimes seem a bit overwhelming trying to keep up with it all.

Sadly, the continued focus on Azure meant that there was very little time to work on any audio related code, although I was able to release NAudio 1.9 back in May.

My calendar for the start of 2020 is already starting to fill up, as I've agreed to give two talks at Ignite the Tour London later this month, and I'll be at NDC London helping out on the Microsoft stand. I'd love to meet any of you who are at those events.

In March I'll be back in Seattle for the MVP Summit, and then attending the Pluralsight author summit in London. I'm also going to be producing updates to at least two of my Azure Pluralsight courses to keep things up to date.

I expect a lot of my content this year will continue to be focused on Azure. I'm currently doing a lot of prototyping with Cosmos DB and AKS, and I'm keeping a close eye on dapr.

But I also hope to keep doing bits and pieces of audio related programming, as well as trying to find more time for making music, which is one of my favourite hobbies. I've reorganized my home office this Christmas to keep my instruments close at hand, allowing me to mix a bit of fun in with work. 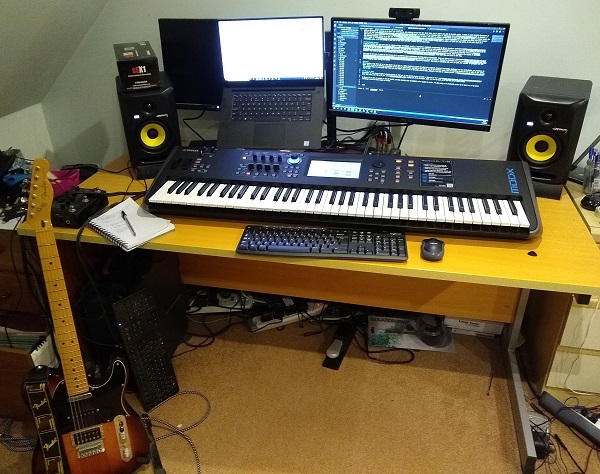 Finally, a huge thank you to everyone who has watched my courses, attended my talks and read my blog. I especially appreciate all the feedback you've given me. It's great to know that the content I am producing is proving helpful for people.