It’s that time of year again where I reflect on what I’ve accomplished in the last year and what I want to prioritise in the next.

This year I achieved the milestone of having 10 published Pluralsight courses after releasing two new courses. The first of these was on More Effective LINQ, a topic I love teaching about, as I’m a huge fan of LINQ.

The second is a much more niche topic – I looked in depth at the new AudioGraph API on the Universal Windows Platform. It’s great to see that finally Windows has a nice easy to use audio programming API. Whether the whole UWP platform really takes off remains to be seen, but I enjoyed the chance to get familiar with it as part of the preparation for this course.

As I said in last year’s review, I am now a “cloud architect”, and you may have noticed a lot more blogging about Azure in the last year. I certainly still have a lot to learn about building cloud deployed systems that are secure and resilient, but after a pretty intense year of learning, I don’t feel quite so out of my depth any more.

The product I’ve been building last year is now live and in use by our first customer, and hopefully several more by the end of the year. You can expect plenty more Azure related blogging in the coming year.

I also am starting to feel a lot more confident using F#, which has become one of my most blogged about topics. I even dared to submit an entry to this year’s F# advent calendar. There’s still some parts of F# I need to get more confident in such as type providers and asynchronous coding, so hopefully I’ll make further progress next year. I’ve really been enjoying the early releases of Isaac Abraham’s Learn F# book recently.

Also, in a non-programming related goal, I managed to complete my Duolingo French tree after maintaining my “streak” for the entire year. I can even just about follow French dev podcasts like Visual Studio Talk Show now. 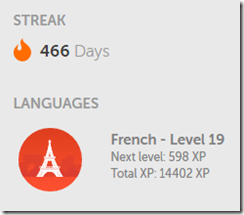 More by coincidence than choice, my first ever smartphone was a Windows Phone, and I’ve faithfully stuck with the much maligned OS for several years. But this Christmas I needed a new phone, and there was literally no option available in the price range I was looking to spend (£150-200). So I took the plunge and got my first Android phone, and finally it means I can get to use many of the apps that I was previously locked out of. Who knows, it may be the catalyst for me to finally learn some Xamarin, which I have mostly ignored until now.

My Creating and Selling a Digital Product Pluralsight course tells the story of how I created Skype Voice Changer and sold it online. It was never a runaway success, partly because a change to how Skype works meant that over the last year, fewer and fewer people are able to successfully use it. I finally took the decision to retire the product by withdrawing it from sale a couple of months ago, having made a few hundred sales over the course of two years.

Although it’s disappointing to have to shut this down (especially since the traffic to the site continues to grow), it was a good learning lesson, and I also think that supporting users with problems had become a time-wasting distraction to other things that were more deserving of my time. So I think it’s good I’m finally done with this project.

Although audio programming and NAudio in particular have been something of a specialist subject for me, I have had to accept that audio programming is no longer a significant part of my day job. So although I’ve worked hard this year to answer hundreds of questions, accept pull requests (another 16 this year) and make improvements (I made 40 commits this year), the truth is that the project is really in maintenance mode at the moment. I did however release a long overdue new version (1.8) just before the year end which I intend to blog about soon.

I’ve currently got a new Pluralsight course in the works (hoping to announce something in the not too distant future), and I expect my focus will be increasingly on cloud related topics such as Azure or serverless architecture in the next year.

In terms of new technologies I want to learn, Docker stands out as the one that continues to gain momentum and it looks like it is well on the way to becoming a solid option for Windows and .NET developers.

So finally, let me say Happy New Year to you, and if any of you happen to be at the NDC conference in London in January, I’ll be there on the Friday (and at PubConf afterwards) so do say hello.