Visual Studio 2017 comes with a great new feature called Live Unit Testing. This feature discovers and runs unit tests while you are coding, giving you inline feedback of which tests are passing, and exactly which lines are covered by the tests.

When the tests are passing you see a green tick by each line covered by at least one passing test.

When it fails you see a red cross for each line covered by the failing test, and lines that aren't covered by any tests have a blue dash. 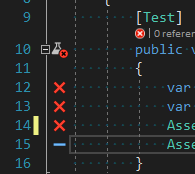 This is a great way to get rapid feedback about the code you're currently writing. I recently attempted to get it working on a large project that had lots of NUnit tests. It's not too difficult, but there are a number of gotchas that you can run into along the way, so here's my notes for what you need to get Live Unit Testing running successfully on a project with NUnit tests.

Here's how quick it picks up changes when you're testing in a small project which is really nice and responsive. I don't even need to save the file: