If you subscribe to an event in C# and forget to unsubscribe, does it cause a memory leak? Always? Never? Or only in special circumstances? Maybe we should make it our practice to always unsubscribe just in case there is a problem. But then again, the Visual Studio designer generated code doesn’t bother to unsubscribe, so surely that means it doesn’t matter?.

Fortunately it is quite easy to see for ourselves whether any memory is leaked when we forget to unsubscribe. Let’s create a simple Windows Forms application that creates lots of objects, and subscribe to an event on each of the objects, without bothering to unsubscribe. To make life easier for ourselves, we’ll keep count of how many get created, and how many get deleted by the garbage collector, by reducing a count in their finalizer, which the garbage collector will call.

Here’s the object we’ll be creating lots of instances of:

and here’s the code we’ll use to test it:

I’ve added a background timer on the form, which reports every second how many instances are still in memory. I also added a garbage collect button, to force the garbage collector to do a full collect on demand.

So we click our button a few times to create 80,000 objects, and quite soon after we see the garbage collector run and reduce the object count. It doesn’t delete all of them, but this is not because we have a memory leak. It is simply that the garbage collector doesn’t always do a full collection. If we press our garbage collect button, we’ll see that the number of objects we created drops down to 0. So no memory leaks! We didn’t unsubscribe and there was nothing to worry about.

But let’s try something different. Instead of subscribing to an event on my 80,000 objects, I’ll let them subscribe to an event on my Form. Now when we click our button eight times to create 80,000 of these objects, we see that the number in memory stays at 80,000. We can click the Garbage Collect button as many times as we want, and the number won’t go down. We’ve got a memory leak!

and the code that creates instances of it:

and here’s the result:

The reason for this is that under the hood, the .NET events model is simply an implementation of the observer pattern. In the observer pattern, anyone who wants to “observe” an event registers with the class that raises the event. It keeps hold of a list of observers, allowing it to call each one in turn when the event occurs. So the observed class holds references to all its observers.

What does this mean?

When it goes wrong is when you have a class that will exist for the lifetime of your application, raising events whose subscribers were supposed to be transitory. Imagine your application has a order service which allows you to submit new orders and also has an event that is raised whenever an order’s status changes.

Now this could well cause a memory leak, as whatever class contains the OnOrderStatusChanged event handler will be kept alive for the duration of the application run. And it will also keep alive any objects it holds references to, resulting in a potentially large memory leak. This means that if you subscribe to an event raised by a long-lived service, you must remember to unsubscribe.

What about Event Aggregators?

But are event aggregators subject to memory leaks? Do they leak in the same way that regular event handlers do, or do the rules change? We can test this out for ourselves, using the same approach as before.

For this example, I’ll be using an extremely elegant event aggregator built by José Romaniello using Reactive Extensions. The whole thing is implemented in about a dozen of code thanks to the power of the Rx framework.

And we’ll also try many short-lived subscribers with a single long-lived publisher (our main form):

What happens when we create thousands of each of these objects?

We have exactly the same memory leak again – publishers can be garbage collected, but subscribers are kept alive. Using an event aggregator hasn’t made the problem any better or worse. Event aggregators should be chosen for the architectural benefits they offer rather than as a way to fix your memory management problems (although as we shall see shortly, they encapsulate one possible fix).

How can I avoid memory leaks?

So how can we write event-driven code in a way that will never leak memory? There are two main approaches you can take.

It’s confusing because the object we unsubscribe with is clearly a different object to the one we subscribed with, but under the hood .NET works out the right thing to do. But if you are using the lambda syntax, it is a lot less clear what goes on the right hand side of the –= (see this stack overflow question for more info). You don’t exactly want to keep trying to replicate the same lambda statement in two places.

This is where event aggregators can offer a slightly nicer experience. They will typically have an “unregister” or an “unsubscribe” method. The Rx version I used above returns an IDisposable object when you call subscribe. I like this approach as it means you can either use it in a using block, or store the returned value as a class member, and make your class Disposable too, implementing the standard .NET practice for resource cleanup and flagging up to users of your class that it needs to be disposed.

2. Use weak references. But what if you don’t trust yourself, or your fellow developers to always remember to unsubscribe? Is there another solution? The answer is yes, you can use weak references. A weak reference holds a reference to a .NET object, but allows the garbage collector to delete it if there are no other regular references to it.

The trouble is, how do you attach a weak event handler to a regular .NET event? The answer is, with great difficulty, although some clever people have come up with ingenious ways of doing this. Event aggregators have an advantage here in that they can offer weak references as a feature if wanted, hiding the complexity of working with weak references from the end user. For example, the “Messenger” class that comes with MVVM Light uses weak references.

Now let’s see if it works by creating some short-lived subscribers that subscribe to events on the WeakEventAggregator. Here are the objects, we’ll be using in this last example:

And we create another 80,000, do a garbage collect, and finally we can have event subscribers that don’t leak memory: 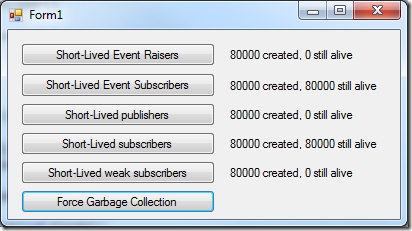 Although many (possibly most) use cases of events do not leak memory, it is important for all .NET developers to understand the circumstances in which they might leak memory. I’m not sure there is a single “best practice” for avoiding memory leaks. In many cases, simply remembering to unsubscribe when you are finished wanting to receive messages is the right thing to do. But if you are using an event aggregator you’ll be able to take advantage of the benefits of weak references quite easily.

Which VS version your sln and csproj files belong to? I am trying to open it with VS 2010 and getting compatibility errors.
- John