I recently wanted to try out the preview of .NET Core 2.1, so that I could experiment a bit with the new Span<T> functionality, which is something I'm very excited about.

Which SDK do I need?

But when I visited the .NET homepage (found at the easy to remember https://dot.net), and navigated to the all downloads page, I must confess to being a little confused by the experience... 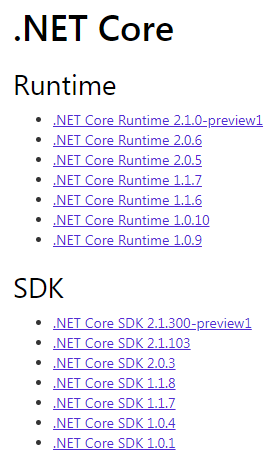 That's right, there's two 2.1 SDK's available. The one called 2.1.300-preview1 is the one I wanted - that's the SDK for the .NET Core 2.1 preview runtime. Confusingly the 2.1.103 SDK actually contains the 2.0 runtime (not 2.1)! There's a new versioning strategy going forwards that will make the relationship between runtime and SDK easier to understand, but before that, the runtime and SDK version numbers did not necessarily correspond.

Will bad things happen if I install a preview SDK?

So I've worked out that I need 2.1.300-preview1, but like many developers, I've been burned in the past by installing bad preview bits that mess up my development machine. So I had two key questions before I was ready to pull the trigger. First, will installing a preview .NET Core SDK break something?, and second, can I easily switch back to the release version of the SDK?

There's good news on both fronts. First of all, .NET Core SDKs are installed side by side, so will not modify any previous SDK installations. So when I install the preview, all that happens is that I get a new folder under C:\Program Files\dotnet\sdk. You can see here all the various .NET Core SDK versions I've got installed on this PC: 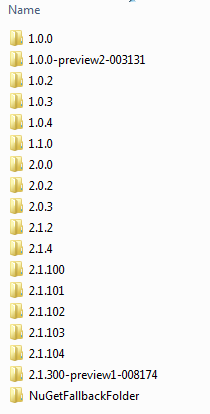 And the same is true for the .NET Core runtime. Inside the C:\Program Files\dotnet\shared\Microsoft.NETCore.App folder we can see all the versions of the runtime I've installed, including the 2.1.0 preview that came with the SDK: 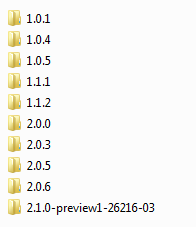 So that's great, I've got the 2.1 preview SDK and runtime available on my machine, and I can experiment with it. But now we need to know how to identify which one of these SDKs is currently active, and how to switch between them.

What version of the SDK am I currently running?

If I go to a command line and type dotnet --version it will tell me the SDK version I'm currently running, which will be the preview version I just installed:

What SDK and runtime versions are installed?

Two other handy commands to know are dotnet --list-sdks to see all installed SDKs: 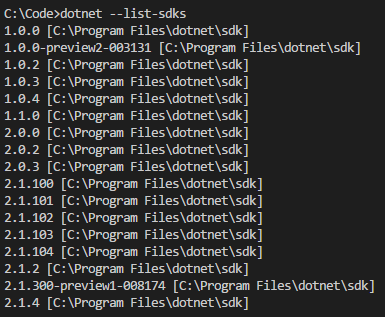 and dotnet --list-runtimes to see all installed runtimes:

How can I switch between .NET Core SDK versions?

Since my current version is 2.1.300-preview1-008174, if I run dotnet new console it will create me a .csproj with that targets the .NET Core 2.1 runtime (which is of course still in preview at the time of writing):

That's great if I want to experiment with the .NET Core 2.1 preview, but what if I just want to get back to the version I was using before, and build .NET Core 2.0 apps? In other words, when I type the dotnet command in the console, how can I control which version of the SDK I am actually using?

And if I do a dotnet new console we'll see that the generated .csproj targets the 2.0 runtime, as we'd expect:

It's always daunting to install preview bits on your developer machine as you don't know what might break, but with .NET Core, SDKs and runtimes are installed side by side, and so long as you know about global.json it's very easy to control which version of the SDK you're using. And the version of the runtime can also be controlled using the TargetFramework (and, if necessary the RuntimeFrameworkVersion) properties in your .csproj file.