I’ve open sourced a simple utility I wrote earlier this year, when I was preparing to give a talk on DVCS. It’s called GraphPad, and it’s a simple tool for visualising Directed Acyclic Graphs, with the ability to define your own with a basic syntax, or import history from a Git or Mercurial repository. 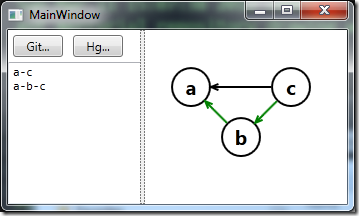 The idea behind it was that I would be able to use it in my talk to show what the DAG would look like for various. The really tricky thing is coming up with a good node layout algorithm, and mine is extremely rudimentary.

What’s more there are some very nice ones being developed now, particularly for Git, such as SeeGit or the very impressive “dragon” tool that comes with the Git Source Control Provider for Visual Studio, both of which are also WPF applications. Mine does at least have the distinction of being the only one I know of that also works with Mercurial.

For now, I am not actively developing this project, but I thought I’d open source it in case anyone has a use for it and wants to take it a bit further (the next step was to make the nodes show the commit details in a nice looking tooltip for Git/Hg repositories, as well as showing which nodes the various branch and head/tip labels are pointing at).

You can find it here on GitHub.