So if you haven’t guessed yet from this mini-series I’ve been running on this blog, I’ve been working on a new training course for Pluralsight about creating and selling a digital product online. If all goes well, it will go live later this summer.

One of the topics I wanted to cover in the course was advertising. But I had a problem – I had never personally advertised any products. So I asked around a large group of people who had successfully sold their own digital products online. Did any of them have a story to share of successful advertising of their product?

To my surprise, not one person who had paid for advertising felt they had generated enough sales for it to be worthwhile. It left me wondering, is advertising something that only big companies can use effectively? Maybe you need to hire advertising specialists to have any success.

So I decided to do an experiment. I would create my first ever online advert, and see how many sales I could generate. And I’d show the results, good or bad, to the viewers of my course. This was a big risk, as I could end up looking a fool and simply throw my money away.

So how did it go? Well, let me walk you through the process…

First of all I needed to decide what sort of advertising to use. There were three obvious choices - Google Ad-Words, Twitter ads, or Facebook ads.

I decided that Facebook would be the best choice for Skype Voice Changer. After all, it’s a bit of a fun application, and Facebook give you the ability to get very specific about who you are targeting.

Next up, I needed to create an advert. In Facebook you can choose to get people to like your page, or send them to a specific URL. I chose the latter, as I have no real need for people liking my page.

You get to specify some text, and a headline. The quality of your choice here can have a big impact on how many people click (as we shall see soon). My initial choice was just to tell people what the main two features of my app are. 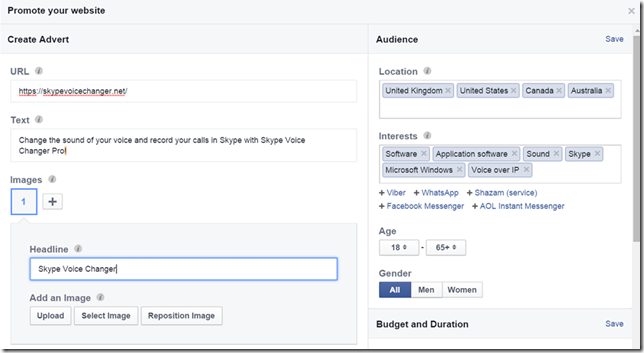 Next you need to decide who Facebook will show your ad to. You can target by age or gender. But you can also specify location and interests. Location is great, because you can specifically select the countries that your best customers come from. And by specifying some interests, you can try to limit your audience to people who might actually be interested in what you are selling. 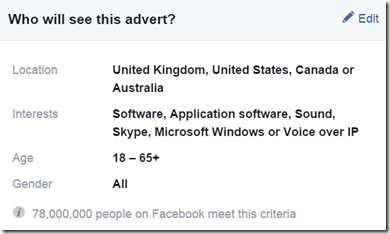 4. Customize Text and Add an Image

Next up, you can customize your advert a bit more by tweaking the text and showing an image. I paid for a stock photo of a girl using Skype. You can usually find stock photos fairly cheaply if you haven’t got a suitable product image to use. 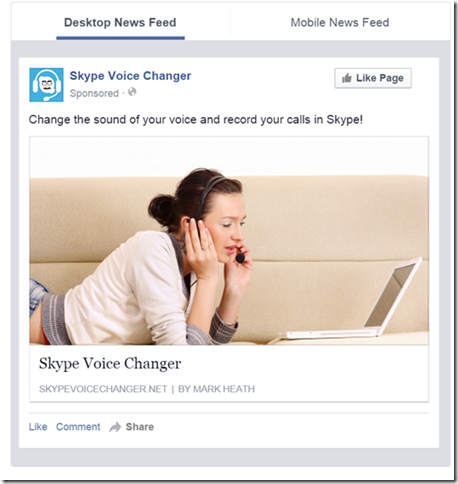 5. Set Your Budget and Duration

Given the lack of success everyone else seemed to have with advertising, I wasn’t going to shell out a lot of money for my first ever effort. I decided that I would spend just enough that I would need to make about two or three sales from the advert to get my money back. 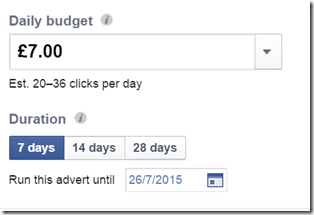 As you can see, Facebook will estimate how many clicks your advert will get per day. Note though that this is only an estimate. You can end up with less.

The good news is that you are not tied in to your selection. You can end your advert early if it is not working out for you.

Now your advert does need to be approved before it goes live. But I found this happened quickly.

It’s easy to see what is going on with your advert by checking in to the Facebook Adverts Manager.

With any luck, before too long, you’ll see some clicks…

And this will give you an idea of how well your advert is doing. In my case, not very well. At only four clicks after spending half a day’s budget, it was clear I was not going to get those 20-36 clicks a day predicted by Facebook.

So things weren’t working out for me, but I read somewhere that your advert should ask a question. So I changed my headline to ask “want to change the sound your voice in Skype?”. 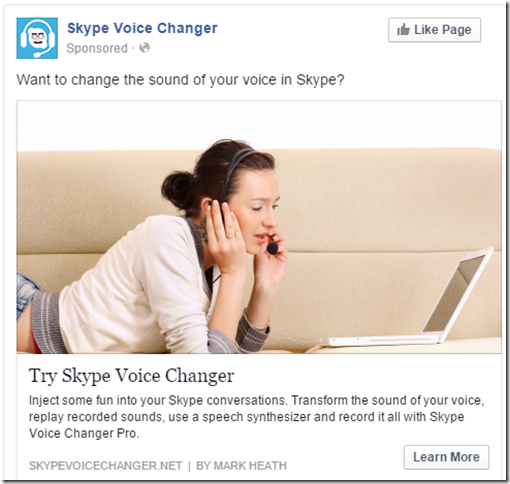 Now I needed to resubmit the ad for approval, which happened quite quickly. The results could be tracked in Facebook Ad Manager, and the click rate almost doubled straight away.

Now the whole point of advertising is to make a sale, and to be honest, I wasn’t hopeful. Only 1 in 200-300 people who visit my site buy the product, so getting 20 visitors a day for a week was hardly likely to make any sales.

But then, against the odds, the first one came through after just 23 clicks! At least I think it was due to the advert. You see, visitors to my site first install the app, and only later come back to make a purchase. So it’s not always easy to know what route a buyer took in their first visit to my site.

But in this case, the purchaser came in from Canada, and as it happened, most of the people Facebook was showing my advert to were in Canada:

I needed to wrap my advert up after five days, but by then I had 89 clicks, and at least one sale from the adverts, maybe one or two more. If it was just the one sale, then I lost half the money I paid out for the advert.

So maybe my effort was a failure too. But something interesting happened the next week. I had higher than average sales, including a couple coming in from Canada again. Maybe, just maybe, people who had clicked on the ad, were now returning a week later to make a purchase.

So it’s quite possible that my ad made me a small profit. Obviously I need to work out a better way of tracking where exactly my sales are coming from to be sure.

But whether I made money or not from this exercise, I certainly learned a few interesting things.

First, I learned that the headline text of your advert can dramatically affect click rate.

Second, I discovered that the age-group clicking my ad was a lot older than I suspected. Instead of appealing to teenagers, it was people in the top age brackets who were clicking.

Third, I now know roughly what it costs to get a visitor to my site with Facebook. So if I can improve my conversion rate on my landing page, then advertising may well become something that is worth paying for again.

So I hope that gives you some insights into what’s involved in creating your first ever advert on Facebook. It’s not actually that hard to get started with. And while I can’t say it was a definite success, it certainly wasn’t a complete failure.

Why not give it a try yourself? Set yourself a small budget, and see if you can beat my results. Let me know how it goes in the comments.